The arch on the Sydney Harbour Bridge was joined on 19 August 1930. It would take another two years for the decking and roadway to be put in place.

‘That arch that cut the skies’

It ‘appened this way. I ‘ad jist come down,
After long years, to look at Sydney town.
An’ ‘struth! Was I knocked endways?
Fair su’prised?
I never dreamed! That arch that cut the skies!
The Bridge! …

—CJ Dennis, I dips me lid to the Sydney Harbour Bridge, 1932

Sydney residents could not quite imagine how people, horses and vehicles would cross the new, mammoth structure. In 2017, Anne Eggins recalled:

My father who worked in his butcher’s shop in Neutral Bay told me that many people were sarcastic about the Bridge, because they thought the cars had to go up and over the arch. There were not many cars on the North Shore at that time and none of them could have made the climb over the arch. They changed their tune when the Bridge opened.

To prepare the city for a suitably momentous opening day, the Sydney Harbour Bridge Celebrations Committee was formed in 1931. The committee organised sporting competitions, art exhibitions, concerts, tours, balls, surf carnivals, a sailing regatta, a race meeting and a celebratory cricket match to mark the opening of the bridge on 19 March 1932. It also launched a public appeal in October to raise £10,000 for the parade floats and additional pomp.

The city spared no expense in its celebrations.

A huge garden party for 2500 guests was thrown at Government House, and the Lord Mayor and Lady Mayoress held the lavish Sydney Harbour Bridge Ball at Sydney Town Hall.

As reported in the Daily Telegraph:

Postponed for over a week, owing to threatening weather, the Government House garden party to commemorate the opening of the Sydney Harbour Bridge was held yesterday in perfect autumn weather. The grounds of Government House looked their loveliest, lawns and flowers making a perfect picture.

Picture hats far outnumbered the tiny autumn models and almost every second frock followed the traditional garden party style, either in lace, georgette or chiffon. Three thousand received invitations… The guests drifted on to the lawns to await the arrival of the Vice-Regal party. After the National Anthem, the Governor and Lady Game mingled with the crowds, receiving and greeting old friends.

An essay competition for school children was held on the topic ‘The Sydney Harbour Bridge—A Landmark in Australian Progress’, with one, young critic awarded a prize for her entry. Ten-year-old Mavis Combo of Cabbage Tree Island Aboriginal School on the Richmond River wrote approvingly of the finished Bridge:

Travelling through tunnels and subways is certainly not as healthy as in the open fresh air, and Dr Bradfield was quite right in opposing all underground schemes.

More congratulations flowed for the Bridge from school children across the State.

A “goodwill scroll” of messages made its way from Tottenham, Victoria, collecting the well-wishes of hundreds of students from 72 schools and travelling to Sydney by foot, car, bicycle and horse. 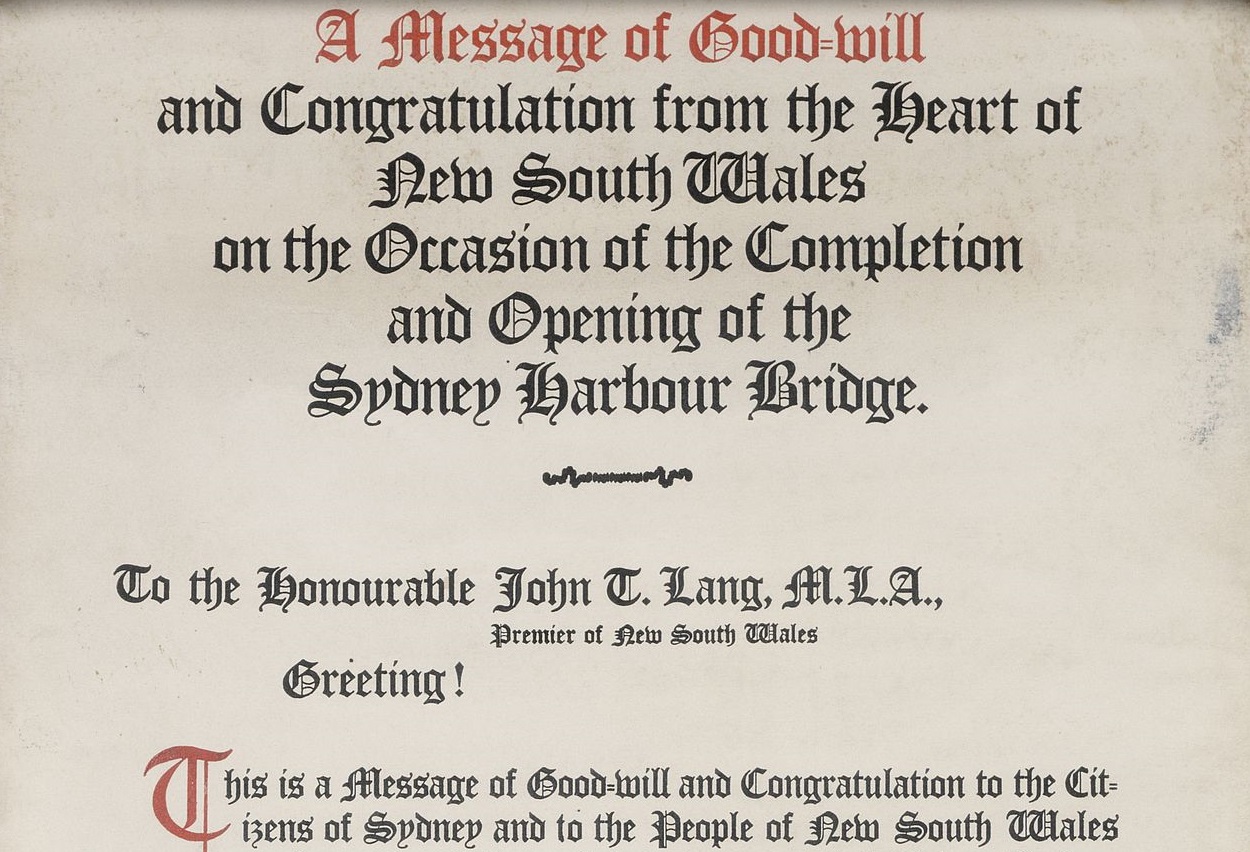 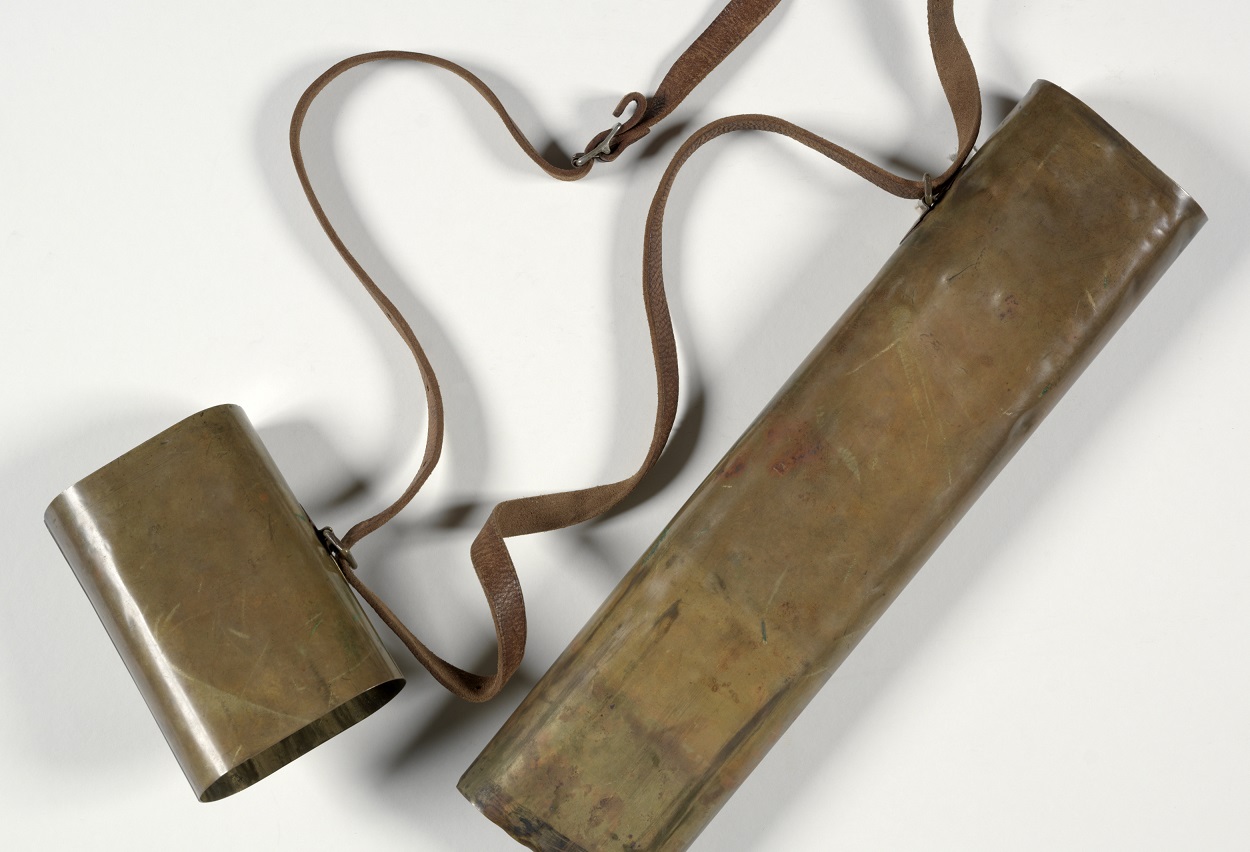 A message [scroll] of goodwill and congratulation … on the occasion of the completion and opening of the Sydney Harbour Bridge, March 1932

The captains of both Fort Street Boys’ and Girls’ High Schools, Reginald Sharpe and Beryl Lamble, ran the scroll’s last leg of its long journey.

The scroll was proudly delivered to Premier Jack Lang and Governor Game, on 17 March 1932, 4 pm.

Admirals and the schoolgirls who delivered a scroll from the schools of NSW on the official opening dais, Sydney Harbour Bridge Celebrations, photonegative, 1932, Home and Away – 38477

The 16th March had been Children’s Day, where over 10,000 school children from 194 schools across New South Wales walked across the Bridge. 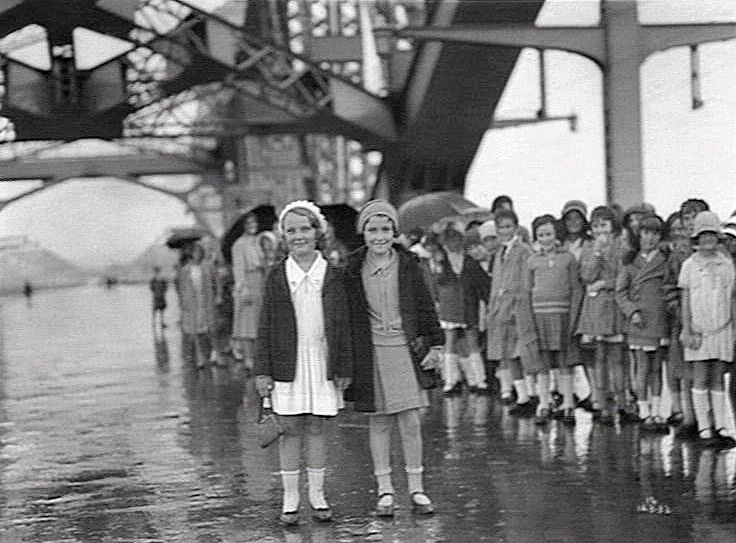 Owen Hardy recalled as a 10-year-old at the time:

It was a very wet and windy day. We walked across the bridge to Milsons Point and back again. We weren’t allowed to march in time in case the vibration caused the bridge to collapse. There had been bridges in France where soldiers marching in time had collapsed the bridge.

Travelling to attend the opening of the Bridge was an occasion that warranted coming great distances, and by any means. The Bulletin reported of one such journey:

‘A little lad on a plump little pony’: Leonard Gwyther who rode all the way from Gippsland to be here with us on this great occasion!

A nine-year-old boy, Lennie Gwyther, had saddled his horse Ginger Mick in February 1932 and ridden alone for four months from rural Victoria to Sydney—a journey of almost 1000 km. Lennie became a local hero and, as a reward for his bravery, was invited to the official opening of the Bridge, where he proudly rode Ginger Mick across its span.

The Labor Premier of New South Wales, Jack Lang, was someone who disliked excess and ceremony. When Opening Day finally came on the 19 March 1932, VIPs found themselves crammed onto a small stage, with few having access to microphones—including the Prime Minister, Joseph Lyons.

Lang, known as ‘the big fella’, was a formidable man both in physical presence—standing at almost two metres tall—and in politics.

He had clashed with a contingent of people still loyal to the British monarchy, who demanded King George VI or Governor-General Philip Game open the Bridge. Later that year, Governor Game would dismiss the Lang government over a dispute involving federal spending of the state budget.

However, during preparations for the opening, the discord between the Premier’s supporters and the conservatives would come to a head. Security was increased in response to threats to disrupt the event.

Still, there were suspicions and tip-offs about schemes brewing.

General scene before the opening, 1932

Indeed, as Ruth Park wrote in the Companion Guide to Sydney, disruption was brewing in the gathering before the ceremony:

It was these shabby people, haggard with hardship and hopelessness, who stood in their thousands on an autumn day … to see the bridge open. They were surprised and amused to see a joker in the pack, an oddball named De Groot, whip in and cut the ribbon before the premier could wave his scissors…

Francis De Groot, a Dublin-born retired cavalry officer, had managed to make his way on horseback to the front of the assembly. He was part of the New Guard, the paramilitary wing of the party loyal to the monarchy—and they had taken exception to the lack of invited Royal Family members at the official opening of the Bridge.

Riding astride in front of the crowd, he sliced the ribbon with his sword and declared the Bridge open in the name of:

– the decent and respectable people of New South Wales! 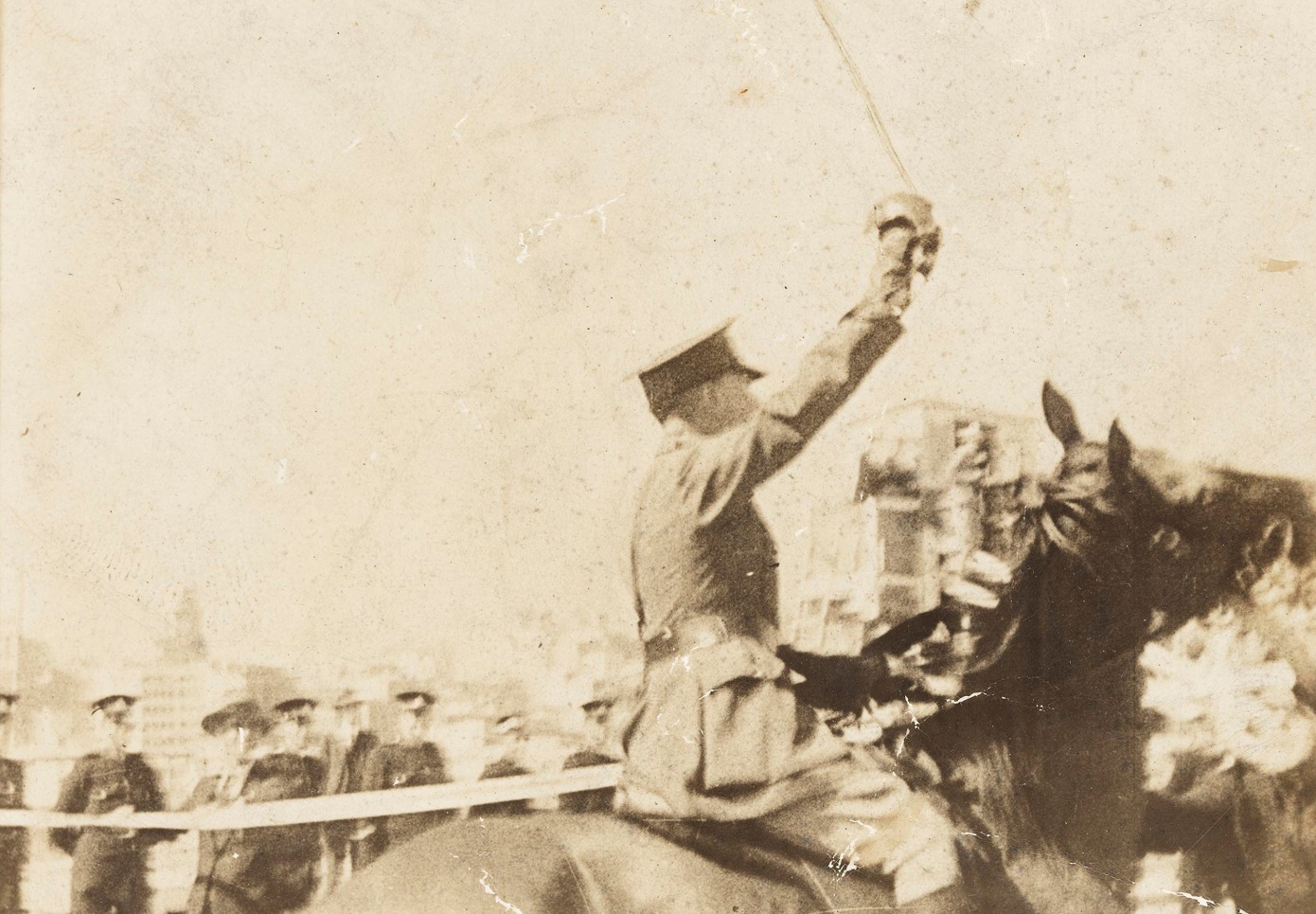 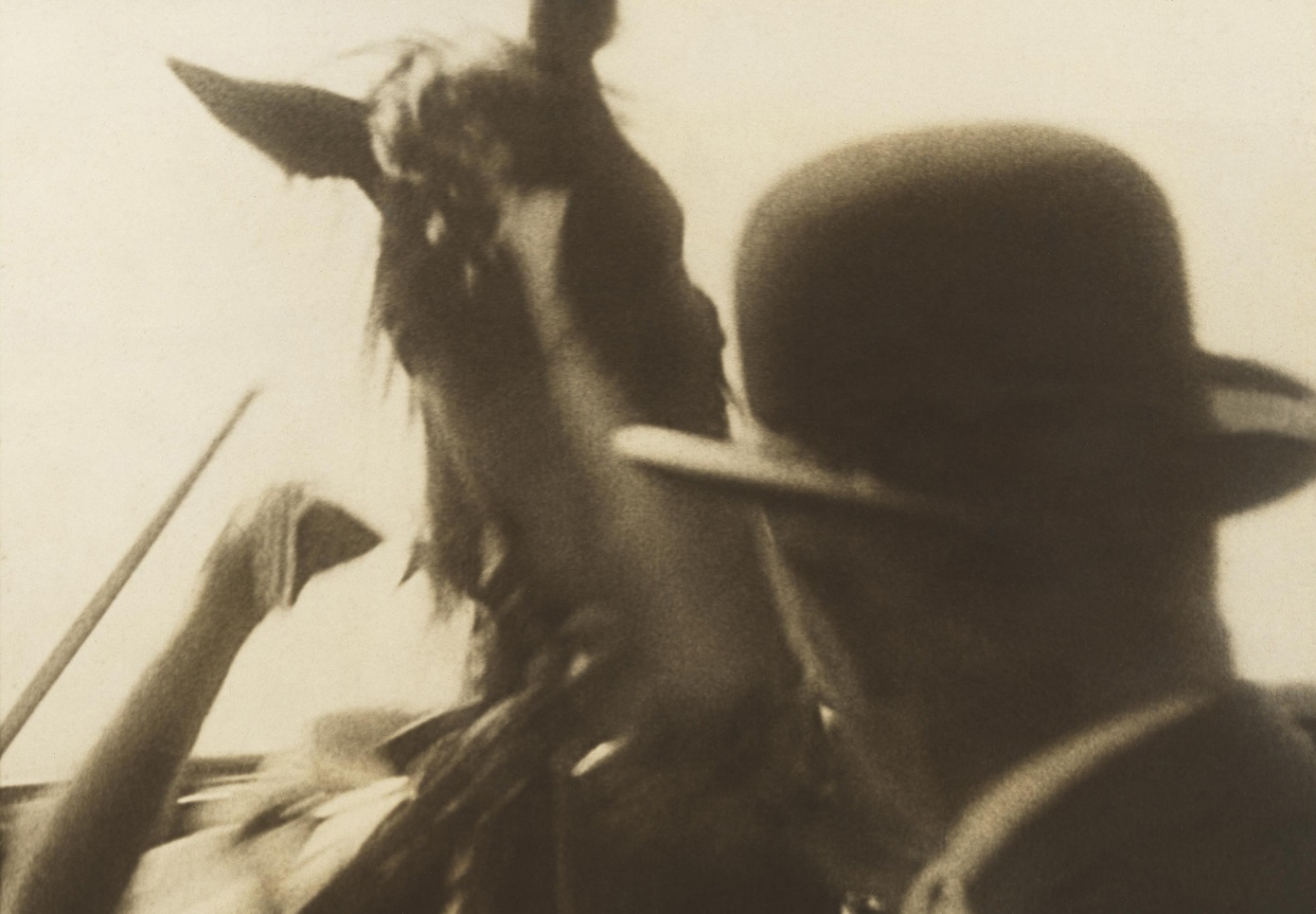 Vera Holliday, at the time working in Dorman Long & Co.’s Dawes Point office at the Bridge, recalled the scene of De Groot crashing the ceremony:

I was on top of the Bridge, of course. Opposite the official stand… at one stage I saw a horseman approaching. Hadn’t seen him before, but as he drew nearer to the official stand, he gave a magnificent salute and something made me watch him pass the stand… and approach the ribbon. And then suddenly up went his sword and the ribbon was cut and down came Mr De Groot.

Scrambling, the official party did their best to retie the ribbon and carried on as if nothing had happened, while De Groot was dragged away by police.

Tying up the severed ribbon after Capt. de-Groot had been arrested, photograph by De Groot and Francis Edward, from Major Francis Edward De Groot - Papers: Vol. 2 - Opening of Sydney Harbour Bridge, no 11 1932, A 4946 De Groot was arrested and would later be found guilty of offensive behaviour in a public place, and was fined the maximum penalty of £5 with another £4 in costs.

He also received many letters of support and admiration as well as gifts from fans, including a rose-gold cigarette case engraved with:

“He is not insane”—an accusation initially brought upon him in the wake of what came to be known as “the incident”.

Once the furore had died down over De Groot’s crashing of the ceremony and self-appointed ribbon cutting, Premier Lang told the crowd, unperturbed:

The achievement of this bridge is symbolic of the things Australians strive for but have not yet attained… the bridge itself unites people who have similar aims and ideals but are divided by geographic boundaries.

Having managed to ensure the successful completion of the Bridge and its opening ceremony, Premier Lang cut the retied ribbon.

There was a long day of speeches, each address acknowledging the extraordinary co-ordination of hundreds and thousands of people in realising the civic marvel of the Sydney Harbour Bridge. Governor Game relayed a message from King George V:

…a magnificent triumph of engineering skill. May it be a means of increasing the prosperity of the people of Sydney and Australia.

Bradfield had arrived early that morning, well before the festivities were due to start, to make sure that everything met his exacting standards.

Dr and Mrs J.C. Bradfield, designer of the Bridge

He had worked for so long to make the Bridge a reality, and said, that day:

In tendering my thanks, I do not forget the workmen who so splendidly responded to the trusts we placed in them. Throughout, they worked magnificently and built the bridge a credit to industrial Australia.

Together with the official party, Lang walked to the northern end of the bridge, where he was met by mayors from across the northern suburbs and the second ribbon was cut by Alderman Hubert Leslie Primrose, Mayor of North Sydney.

Soon after, the celebrations began.

Police in parade uniforms march on Bridge, Sydney Harbour Bridge Celebrations, photographs by Hall and Co, 1932, Home and Away – 38620 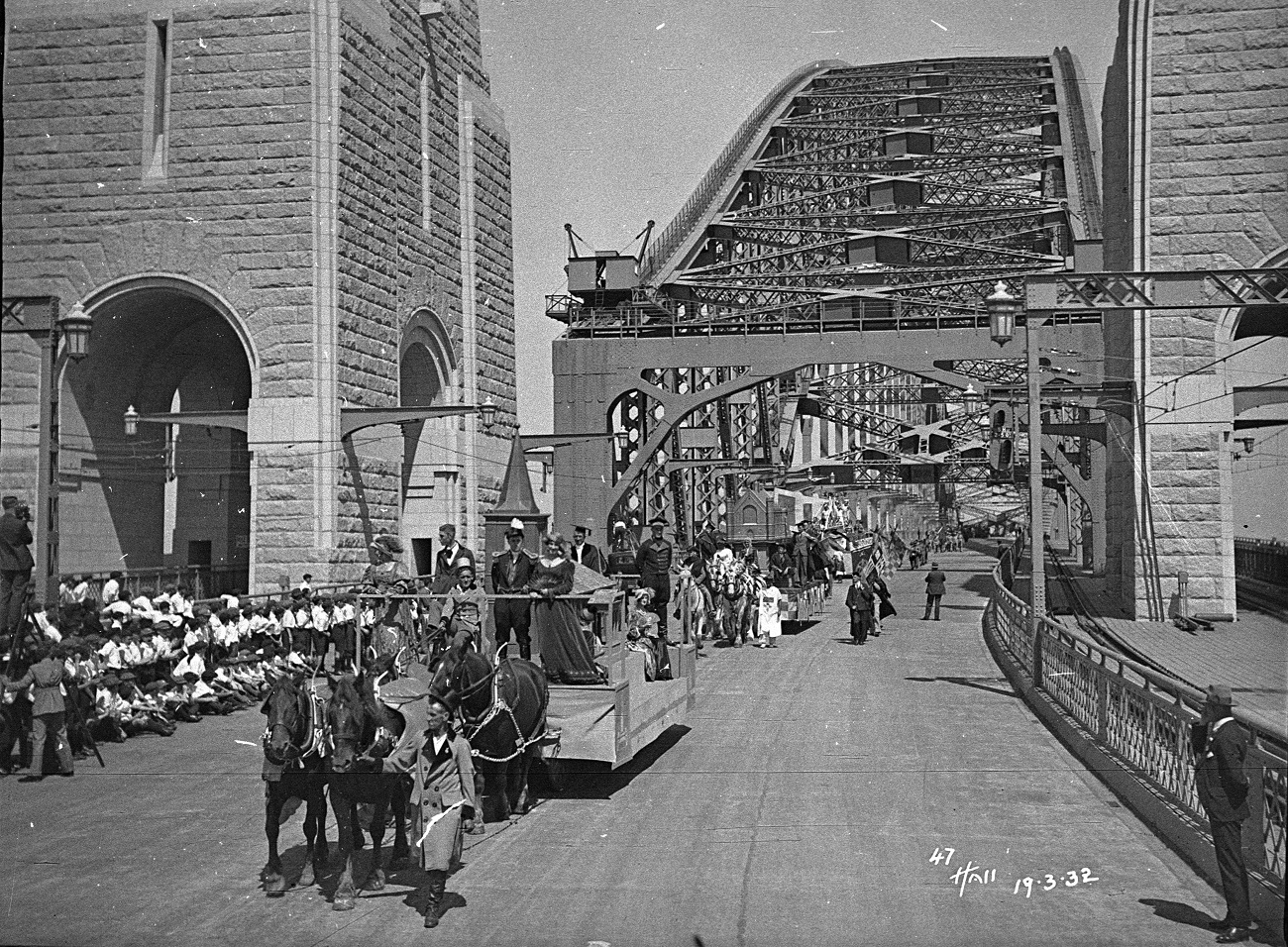 Floats, Sydney Harbour Bridge Celebrations, photographs by Hall and Co, 1932, Home and Away – 38475

People came from all over Sydney, across the country and from New Zealand to witness the opening of the Bridge. The opening ceremony was broadcast nationally, to the United Kingdom and the United States.

The crowd numbered as many as one million. 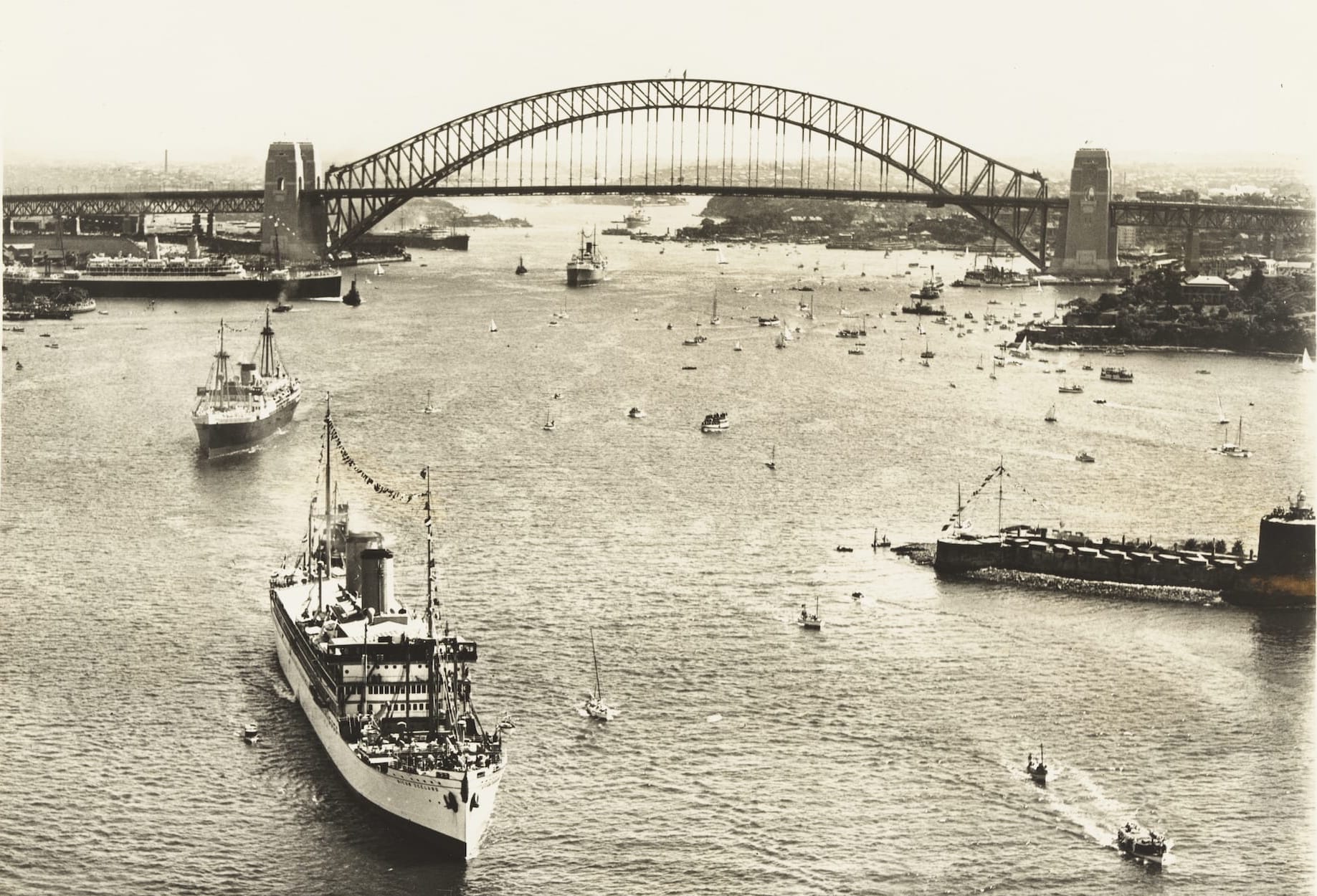 Words are futile things to describe the might and majesty of this wonderful structure. Even pictures can hardly do it justice, because no lens is wide enough to capture in one great sweep its power, full grace and perfect symmetry.

A ferry from the Bridge, 170 feet above, looks almost like a toy, and even a deep-sea ship is dwarfed as she swings beneath the mighty structure that is the picture of massive strength and transcending grace that meets the eye as you reach the pylon; and no other angle conveys so utterly the superlative beauty of this wonder of creation of man’s brains and hands. All honour to those who built it, from the designer to the lowliest workman.

At 7:50 pm, another proud Sydney tradition was born when the first fireworks were let off from the Bridge and into the sky.

Bradfield and his family rode in the first cars allowed across the Bridge on the very early morning of 20 March, after midnight.

The opening of the Sydney Harbour Bridge was a watershed moment for the city, leaving an immediate and long-lasting legacy.

First cars and trains across Sydney Harbour Bridge, photograph by Sam Hood, 1932, Home and Away – 5260

The Bridge even inspired parents to christen their newborns Bridget, Archie, Sydney and Archibald that year.

Indisputably, Sydney was now an international city, ready to take its place on the world’s stage.

Up Next — Episode Five
A Bridge to the World
Start
All episodes: